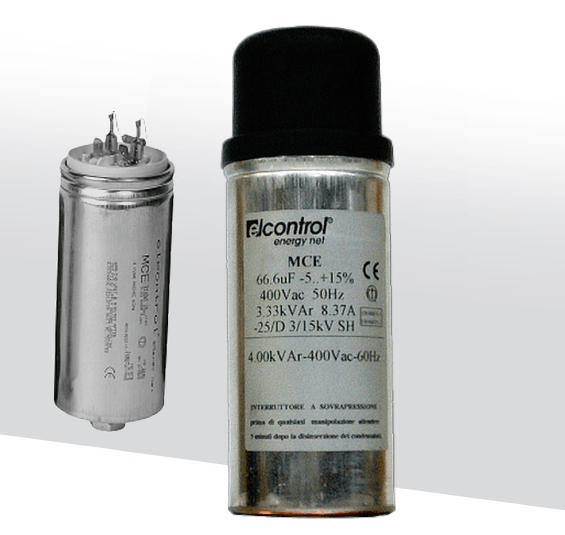 Single-phase capacitors in self-generated metallic polypropylene film with non-toxic and biodegradable impregnation; each element is housed in a metallic housing equipped with an overpressure protection device, which intervenes in the event of a non-regenerable failure.

Each capacitor is provided with a discharge resistor, which allows to reduce the residual voltage of the condenser to less than 75V in 3 minutes, in accordance with CEI EN 60831.

The MCE capacitor (with the exception of the 4.17kvar size) can be equipped with an air-wound inductance mounted on a plastic support which, coupled to the capacitor, reduces the peak current generated when the condenser energizes.

Elcontrol Energy Net, while being able to provide different types of capacitors, selects oil capacitors for its PFC panels and applications to ensure maximum reliability and safety of the plants.

The primacy of oil finness is known:

The dielectric strength of the oil is significantly higher than that of nitrogen or resin; compared to the Avot, the oil solids stiffness is three times higher, ensuring considerable isolation.

A better heat dissipation is guaranteed by a thermal conductivity of more than five times that of nitrogen, while it is comparable to that of the resin.

The oil guarantees immediate visibility of the damaged condenser; the risk of fire may be considered substantially unchanged with respect to nitrogen as the polypropylene film has a high flammability. However, the anti-scratch device guarantees the MCE condenser against the explosion.

© 2019 Elcontrol Energy Net Srl | All Rights Reserved | Powered by Elcontrol
Not your language ?